Back to Upcoming Events

See Maritime legends and the hottest new prospects, perform some of their most popular songs while sharing in the heartache, laughter and original stories that brought the songs to life.

The stage is stacked with talent:

Bruce Guthro - needs no introduction! With more than 1,000,000 records sold world-wide and the recipient of numerous awards, Bruce combines his musical talents with his quick wit and knack for taking the best out in his guests as they tell the stories behind their songs.

Terry Kelly - a storyteller who finds it natural to tell his stories through songs. He's performed in numerous countries while also releasing 7 albums. Terry has won 7 ECMA Awards with multiple CCMA and Juno awards. He's an Order of Canada recipient and his singing, story telling and humour make him a perfect fit on this stage!

Matt Minglewood - a Canadian music icon who's toured all over the world for 5 decades, showing no signs of slowing down. He has 14 recordings, 3 of which reached Gold Record status. Matt has won numerous Regional and National awards, including ECMA and Maple Blues Lifetime Achievement honours.

Do you enjoy music performed all over the world and the stories behind the songs? Do you enjoy laughing and maybe even singing along with the odd tune? If so, you don't want to miss this...

Base ticket $45 + tax and surcharges

Tickets ordered online or by phone may be picked up at the Eastlink Centre Box Office prior to January 31st at 4pm or at the Event beginning 1 hour prior to the show. 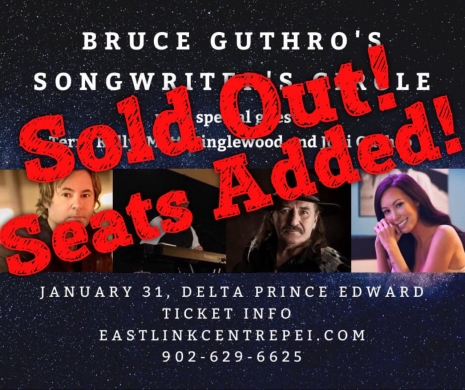